The Life & Significance
of George Ivanovitch Gurdjieff, Part I
Gurdjieff in Egypt: The Origin of Esoteric Knowledge

Winner of the WorldFest 2000 Gold Award

Follows Gurdjieff’s search for pre-sand Egypt beginning with the Sphinx and Great Pyramid, to Thebes and the Temple in Man and Karnak, to the Valley of the Kings, the Temples of Edfu and Abu Simbel, and into Ethiopia where he unexpectedly discovers the origin of the ancient teaching of The Fourth Way.

Shot on-site in St. Petersburg, Moscow, Constantinople, London, Fontainebleau-en-Avon, New York and Lascaux, this documentary film—narrated by William Patrick Patterson and based on his book Struggle of the Magicians—retraces Gurdjieff’s mission to introduce the teaching to the West. P.D. Uspenskii’s and J.G. Bennett’s enigmatic relationship with Gurdjieff are explored. Particularly stressed are the “St. Petersburg Conditions” and Gurdjieff’s technique of “divine acting.” The film vividly demonstrates Gurdjieff’s warning to America of the rise and challenge of the East with footage recalling the 9/11 attack and its aftermath.

Shot on-site in Paris, Avon, Mont Saint-Michel, Lascaux, London, New York, and New Haven, the documentary traces Gurdjieff’s life from his near-fatal car crash through to his giving meetings during the Nazi-occupation of Paris to his death in 1949. Examined in depth are the writing of his Legominism All and Everything and his relationships with Orage, Ouspensky and Bennett. Also included is the Rope and his final trip to the Caves of Lascaux. 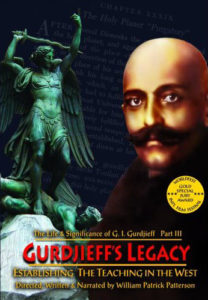 In the spirit of being a son of Mr. Gurdjieff, William Patrick Patterson undertook a 21-day pilgrimage to visit Mr. Gurdjieff’s father’s grave in Gyumri, Armenia. Travelling backward in time, he revisited Gurdjieff’s life:

Introduction to Gurdjieff’s Fourth Way Vol. 1:
From Selves to Individual Self to The Self

Introduction to Gurdjieff’s Fourth Way Vol. 2:
The Movement from Sex to Love

Introduction to Gurdjieff’s Fourth Way Vol. 3:
What Is the Meaning of Human Life on the Planet Earth?

Filmed during a weekend seminar with William Patrick Patterson exploring in depth Gurdjieff’s question of “What is the sense and significance of life on Earth and human life, in particular?” the Dialogue sessions probe the primary purpose of organic life on Earth, the receiving, processing and transmitting of energies, the developing and undeveloped image of God, vibratory electrical beings, societal beliefs of having an indivisible I and a soul, the “I”-of-the-moment, Adam’s power to name animals, perfectly imperfect, living one’s suffered truth, conscious egotist, Kesdjan body, esoteric Christianity, a Christianity before Christ, religion as wholeness, the teaching of our time, Consciousness without objects.